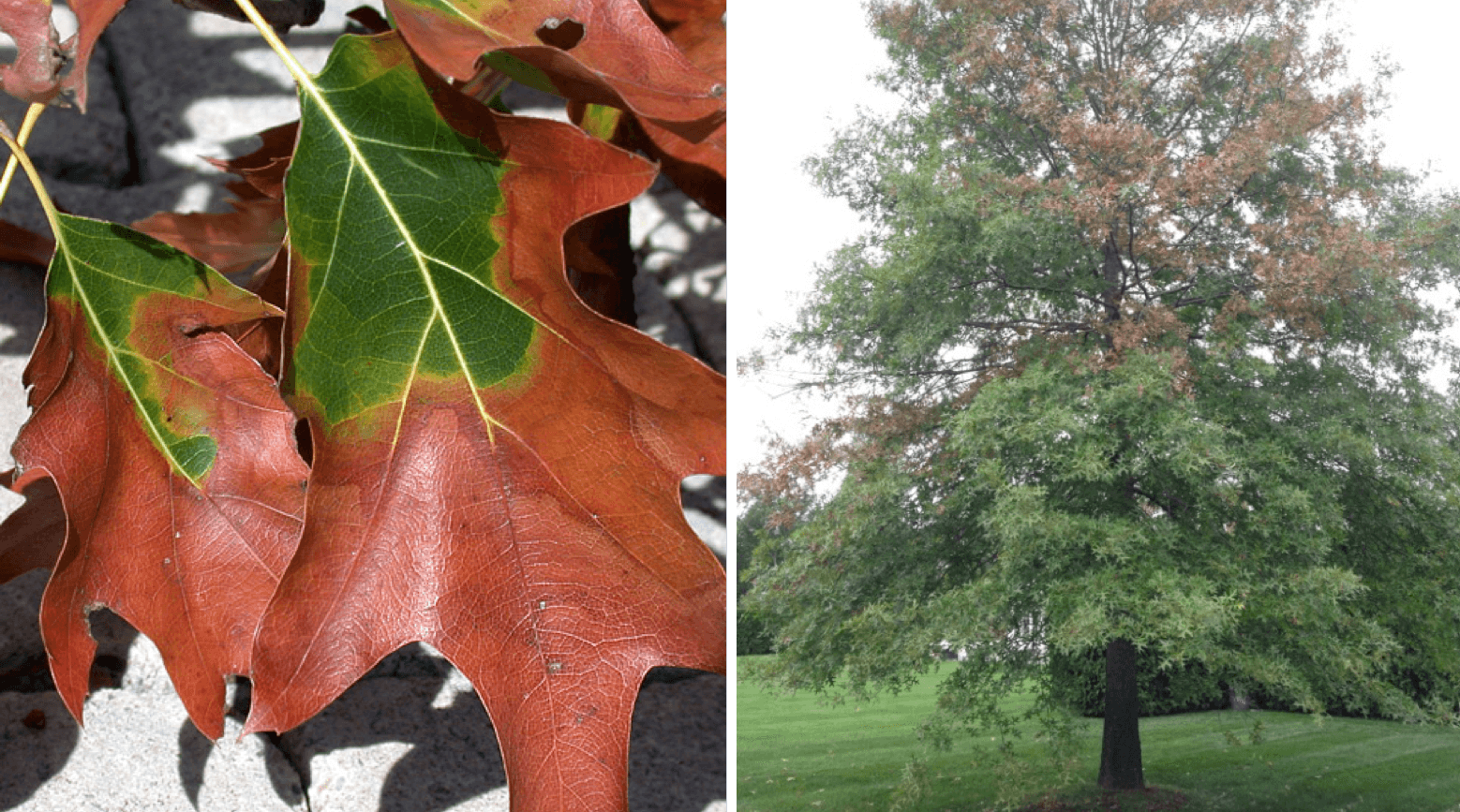 In late summer of 2014, we began to notice some oaks on our clients’ properties that were turning brown earlier than normal. The symptoms appeared similar to drought stress or early fall color. A laboratory analysis detected the presence of Bacterial Leaf Scorch (BLS). BLS is a bacterial disease that causes drought-like symptoms in the foliage. As the season progressed, we began to notice BLS throughout our operating areas in Somerset, Union, and Essex counties. 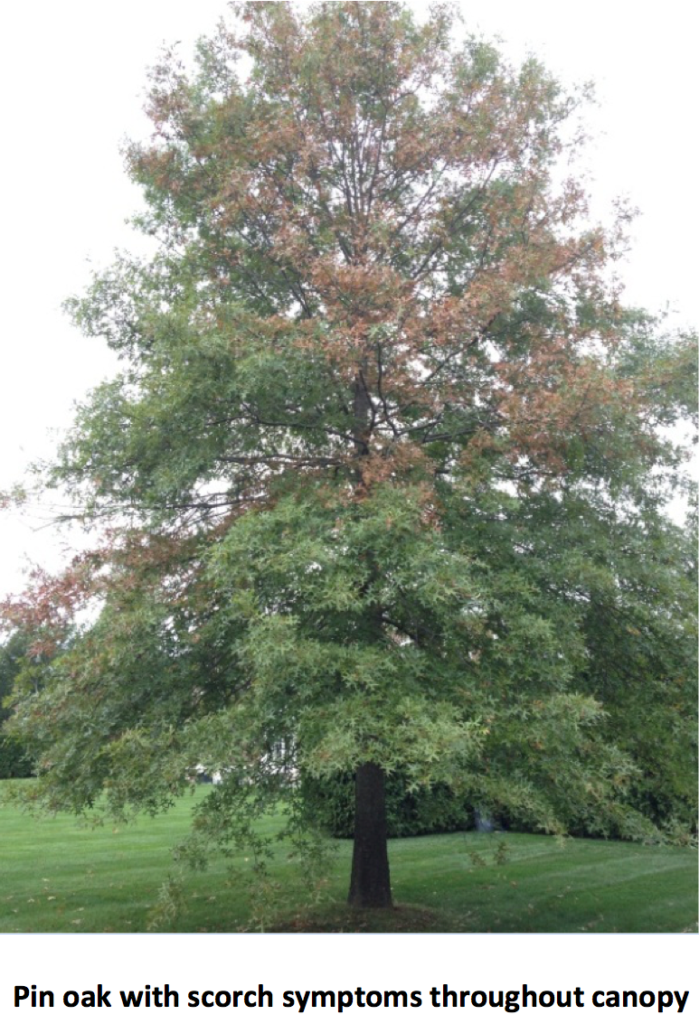 The disease is thought to be transmitted by leafhopper insects when they feed on the foliage of oak and other trees. The bacteria spread into the tree and begin to block the vascular system. Trees emerge with apparently healthy leaves in spring. Symptoms begin to develop rapidly with the onset of hot, dry weather in late summer (July/August). In the early stages, only a few limbs may be affected. After years of repeated defoliation, the trees begin to experience limb dieback and water sprouts or suckers begin to develop. The disease becomes progressively worse each year until the tree dies or becomes hazardous and needs to be removed.

Positive diagnosis in the field is difficult due to indistinct symptoms. Laboratory sampling is the only accurate method for diagnosing BLS. 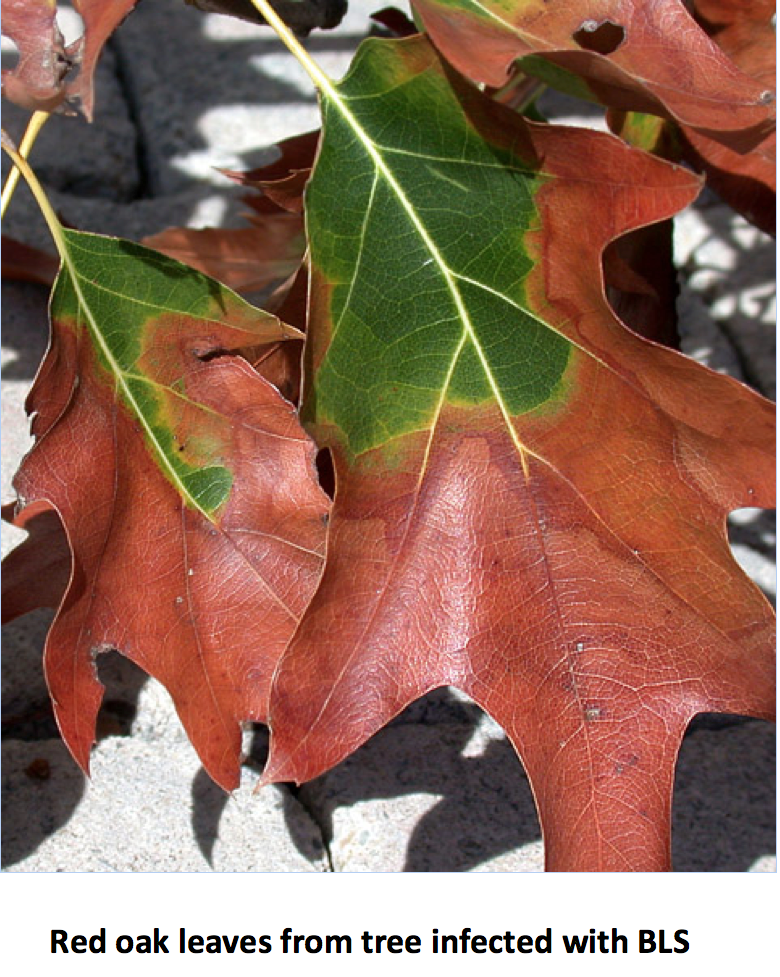 Annual treatments with the anti-biotic Oxytetracycline have been shown to significantly delay the onset of symptoms and extend the life of some species. Unfortunately, if the treatments are not done annually, the symptoms quickly return.

In addition to antibiotic injection treatments, trees can be treated with growth regulators to help reduce the symptoms of BLS. Growth regulators slow the canopy growth by reducing elongation of twigs. By doing this, energy is redirected to the root system. This redirected energy helps to increase the effective root mass of the trees, reducing the likelihood of drought stress.

Maintaining tree health through fertilization, pest management and adequate irrigation may suppress symptoms by assuring adequate moisture availability. Fertilization should be based on tree condition or soil analysis. Trees with BLS should be monitored for secondary insect or disease problems such as cankers, borers, or bark beetles. Pruning should be limited to removal of dead limbs for safety purposes. There is no evidence to show that removal of infected trees reduces the incidences of new infection.

          Begin monitoring trees NOW (from late July/early August) through fall. Look for limbs that are beginning to show signs of browning.

Please call our office at 908.204.9918 to have an Arborist inspect your property today, so we can protect it tomorrow.

Visit Our Partner The Todd Group
for all of your landscaping needs.