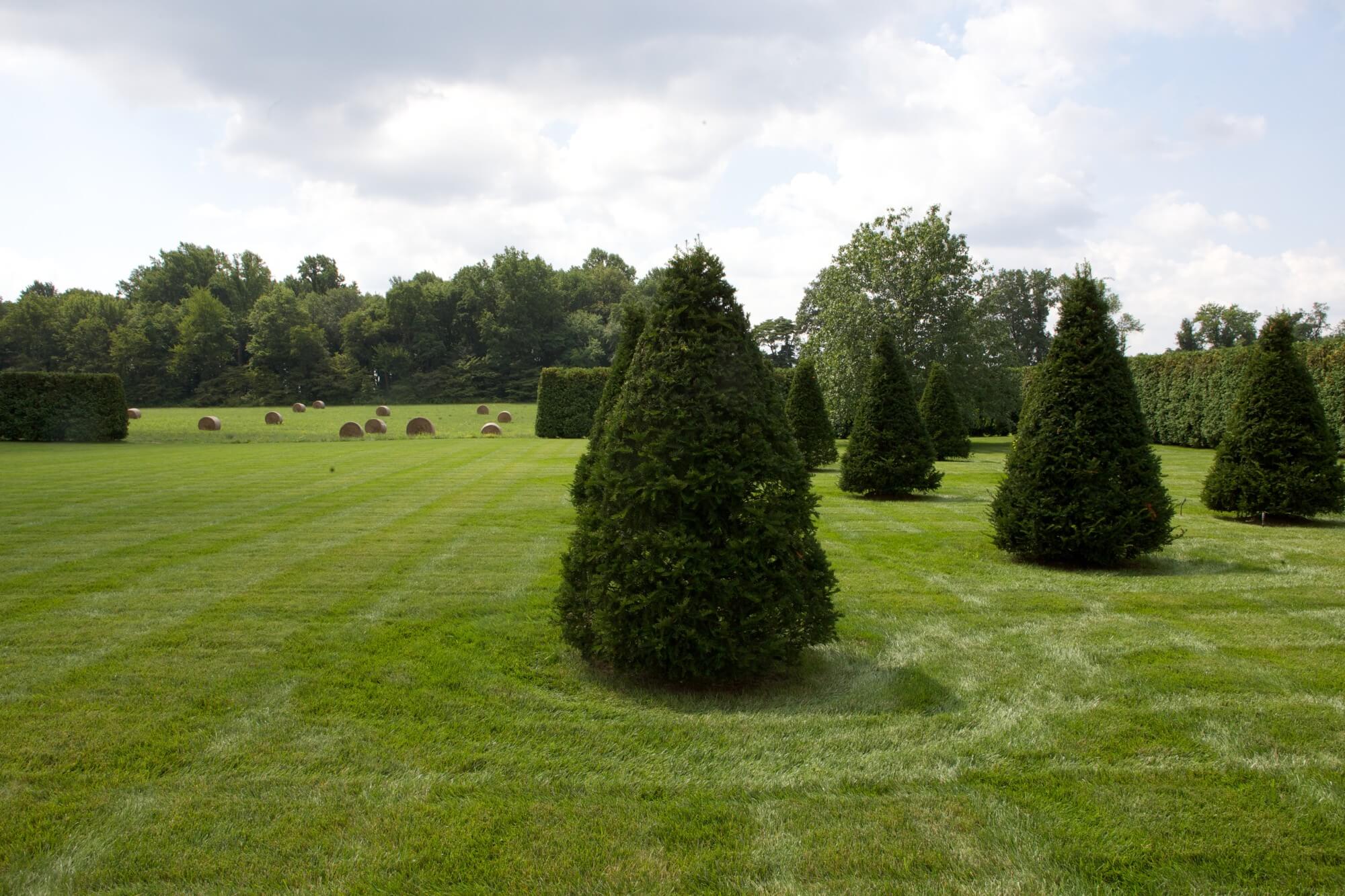 Trees often need pruning for a variety of reasons. Pruning is sometimes needed to help maintain the size and shape of trees and shrubs. Pruning can also be done to eliminate specific defects such as dead limbs or limbs with excessive decay. Sometimes trees are pruned to allow additional light to the yard, lawn, or shrubs planted beneath the canopy. Trees can also be pruned to encourage growth in a certain direction or to promote density or certain styles of growth. Pruning of trees is also often done to allow for a certain ‘view’.

is the removal of dead, damaged, and obviously weak limbs to minimize the risk of damage due to their failure.

is the elevation of lower limbs to allow headroom for walking or to allow additional light to under plantings.

is trimming to maintain the shape and or size of trees and shrubs.

is the pruning of a tree or shrub with the goal of reducing the size.

is trimming of the canopy after major catastrophic damage with the goal of re-establishing the canopy. In restoration, broken stubs are left in the tree so that sprouts form at the point of the break. Soon after the sprouts form, a strong sprout is picked to become the new ‘leader’. Over the next several seasons the sprouts are thinned by removing about 1/3 of them, and the remaining sprouts are reduced. The reduction of all remaining sprouts except the ‘leader’ effectively subordinates them, allowing the leader to gain dominance. Once dominant, the leader should outgrow the remaining sprouts and begin to fill the hole in the canopy over the next few seasons. 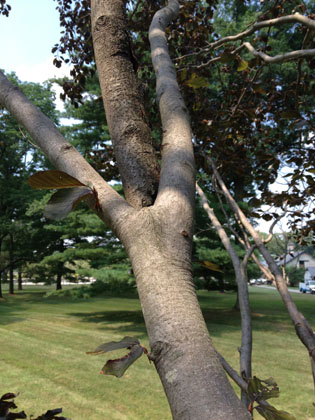 A part of thinning is the removal of crossing and rubbing limbs. If these limbs are left in the tree, the rubbing causes damage that often leads to decay and weakness. It is prudent to periodically thin the branching to eliminate current or future defects. Thinning should begin when trees are young so that defects can be eliminated before they cause damage.

Let us keep your shrubs looking good with our regular pruning. There is nothing like a fresh ‘haircut’ for the shrubs to make your property look and feel well groomed and perfectly manicured. Our pruning experts understand the natural growth structure/habit of different shrubs.  By using the right techniques, they will enable your shrubs to be maintained at a desired height and width specification as well as compliment the natural growth habits of the particular plant.  There are times that a dramatic pruning style is required to achieve a specific look such as in topiaries.  In this case, they follow specific procedures to ensure the desired shape is achieved. 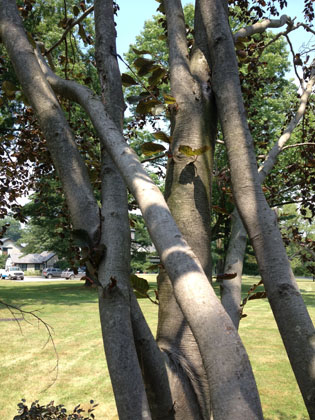 We love trees, but sometimes they become dangerous. We’d prefer to work on keeping them alive and safe, but when the time comes, we are ready. Our arborists are trained to remove dangerous trees in as safe a manner as possible. When removing large and dangerous trees, safety is the main priority. We have a crane available for the most dangerous and difficult removals. Whether it is dangerous or just in the wrong location, Peters Todd’s Tree Experts can get it down safely. Why take chances? Call Peters Todd’s Tree Experts if you have a dangerous removal or if you have a tree that you’re just not sure about. Let us do a comprehensive ‘tree risk assessment’ to help determine the long-term viability of your trees. 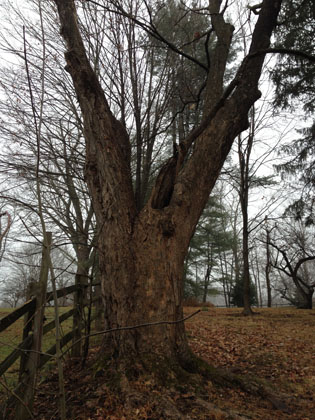 Sometimes a tree is so decayed and weak that we need to take it down. We’d prefer if we could reduce the risk and save the tree, but when the damage is so extensive it becomes hazardous. Let us take the risk out of your hazardous tree. Safety is the main priority when working on hazardous trees.

Sometimes trees grow with defects that make them more likely to fail. Cabling is a great preventive measure that allows for preservation of the tree and increased safety for the surrounding area. If a tree has co-dominant leads, a weak crotch, or long extended limbs, cabling is the method to significantly reduce the risk of failure. Cables are installed in the upper canopy and attach two limbs together to limit their movement, greatly reducing the risk of failure. Before a tree is cabled, you need an expert who can recognize the defect and understand the need. Call Peters Todd’s Tree Experts if you have any questions about cabling or about trees in general. 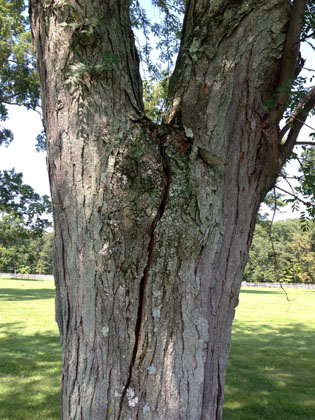 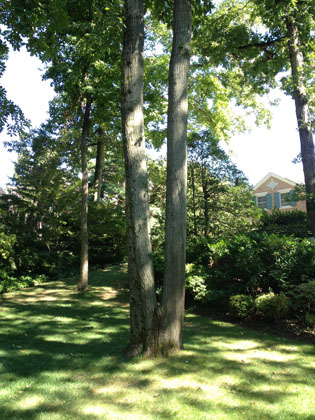 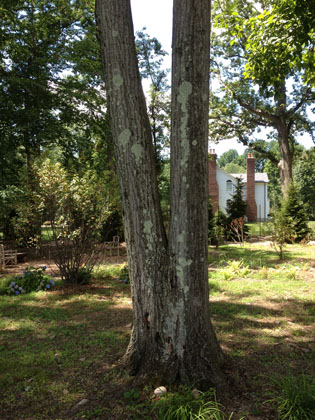 Honey locust that split due to a weak crotch. This tree had a cable installed to limit movement, and brace rods were installed to close the crack and prevent it from getting larger.
Co-dominant leads or a very tightly angled crotch are weaknesses in a tree that benefit greatly from the installation of a cable. Cables limit movement in the upper canopy, making the trees less likely for failure.